Folks from the Open Knowledge Foundation, Code for All, Free Software Foundation Europe, Open Bank Project, AfricaHackTrip, Hacks/Hackers, and Open Product Data facilitated a great evening of skill-sharing, peer-to-peer learning and exciting findings from each other’s projects. We spread the word about open (what is open? What does open knowledge mean? How many things around us can be open?), dug into a multitude of open projects and started discussing and writing down first ideas to be proposed for the festival (we’ll call for the community’s proposals to shape the agenda very soon – sign up for the festival’s newsletter to be the first to know when). 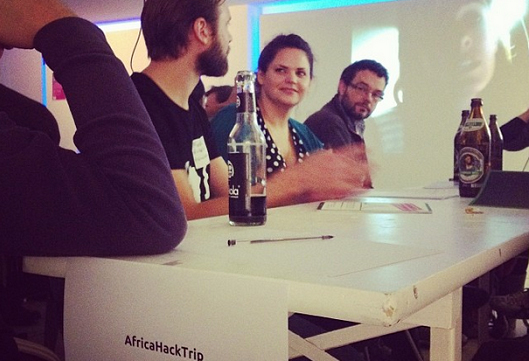 But which are exactly the ingredients that made the evening special? We listed them and thought about sharing with you all – and you’re welcome to have a go too.

Diversity – the speakers came from different open communities (and countries, and languages) and we also invited people who wanted to discover more about open to join. Both newcomers and experienced folks in the open fields found a lot to learn from each other. The open ecosystem spreads itself in all directions, from open source, to open culture, government, science, education, environment and even to products we buy at the supermarket. There is so much to learn, talk about and share – and our peers can be the best source of new exciting discoveries. This doesn’t mean that multiple topics are always recommended, but inviting people with different backgrounds can often be a plus.

Online meets offline and viceversa – some of our attendees and speakers lived in the city we organised the event in, but that would be just half of the fun. Everybody was invited to join the conversation from anywhere in the world: on Twitter (ping the OKFestival crowd anytime including #OKFestival in your tweets), the events’ etherpad (prominently and publicly displayed during the event) and we also had a speaker from another country! Our guest this time was Katelyn Rogers talking about Open Product Data from the UK (see her projected on the wall in our pics). We missed to have Brazilian friends joining due to the overlapping Encontro Nacional de Dados Abertos on the same date – but next time we’ll be together. Hint: find time zones reasonably suitable with yours and ping people passionately working in the open space to invite them to your OKFestival Meetups! (The Open Knowledge Foundation Network could be a good place to start with) 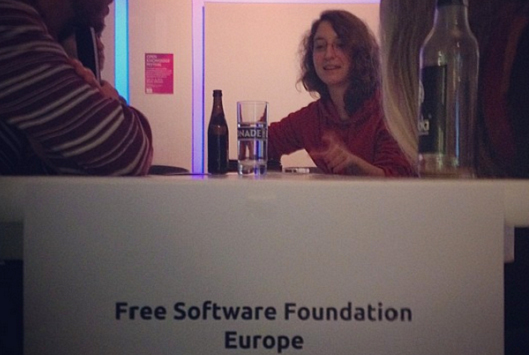 Participatory format – we all love listening to a thrilling lecture, but sometimes attending a talk with just a short Q&A at the end just doesn’t satisfy our curiosity to know more about new topics and people. So we experimented and organized the Berlin evening as a speed geeking session. What is it? Each project (and project’s presenter) has a table with chairs around. Participants are divided into groups, and each group starts sitting at one table, and talks with the presenter for 5 minutes. After that, at the sound of a gong (a kitchen pan, in our case) it’s time for each group to move to the next table and project. And if 5 minutes were not enough, there’s time (and rehydrating drinks) immediately after. It was a lot of fun – we’ll add the format to the Events Handbook soon.

So, what are you waiting for? Wherever you are, whatever is the field of open you’re passionate about, however you want to meet (be it in an embassy, in your kitchen, or in a bar!) – run your OKFestival Meetup! And don’t forget to share all about it on the dedicated etherpad; we can’t wait to hear what open means to you, feature your greatest meetups, and make OKFestival happen with you!Beatrice Martini, the Open Knowledge Foundation’s Event Coordinator, has organised an OKFestival Meetup at SUPERMARKT last November. Here’s her short summary of what has happened and what to expect from the Open Knowledge Festival 2014: