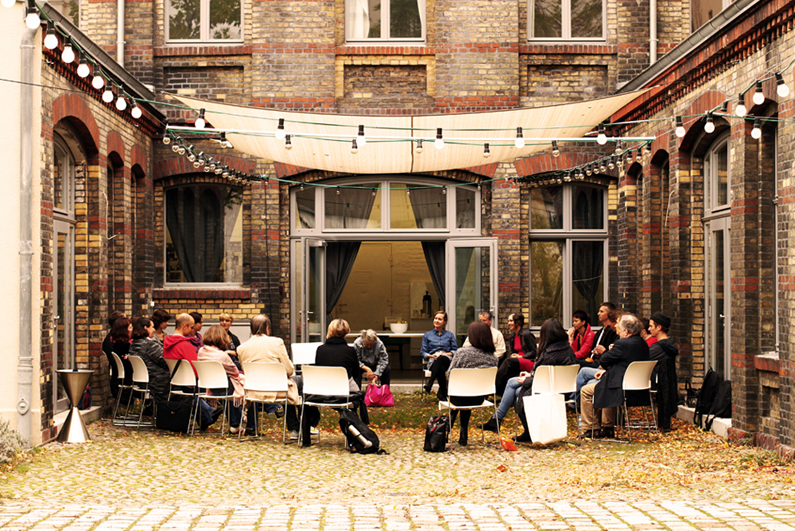 There is definitely something changing about the way people think and talk about work today. In the aftermath of the global financial crisis, a new awareness of how unbalanced, unfair and unjust the labour market really is has been fuelled by world events such as the Occupy movement and an increase in access to information through the advances of new technology. It’s no surprise to me then, that in today’s individualistic society, people are turning towards the alternative, towards new modes of working, inspired by others around them both near and far who are self-organising and self-managing, to claw back power from those who hold the purse strings and the power to employ.

The motivation to curate the WORKAROUND Conference (18-20 October 2013) stemmed not only from these above global changes, but also from my own personal experiences as a generation X-er faced with the new reality of a rapidly changing work environment that our parents never experienced. As a freelance curator and arts educator, the precarious nature of work has always been a well-known aspect of working in the arts, from dealing with the yawning gap between what you get taught at college or university and the reality of working in the arts, to unstable incomes and the expectation that if you work in the arts you should be satisfied with the exchange of “exposure”, and not cash, for your time and labour. Now, I must admit that I have been relatively lucky to have benefited from what I consider a relatively modern Australian arts education system in the early-mid 2000’s – what a shock it was when I landed in the UK in 2008 in the midst of the global financial crisis to hear that most of my peers were on their 5th or 6th unpaid gallery internship and had never been taught anything about the arts sector their university had recently spat them out into. However, these issues are nothing new and I too, despite having an education that was quite industry focused, have had a career filled with my fair share of the usual suspects well known to any arts practitioner – lots of volunteering, a few unpaid internships and a lot of part time admin and bar work.

Fast forward to Berlin 2013, just under a year after my arrival on the back of a pretty successful 4 years in Edinburgh (and by successful, I mean finally being able to support myself solely from my curatorial/arts education practice) and I find myself having the same conversations over and over again about shitty work conditions and the subsequent lack of insurance, healthcare and other perks that a stable wage or employer brings. This was somewhat unsurprising considering Berlin’s reputation as a haven for low-income-earning (usually migrant) creatives (myself included) due to its relatively affordable (for now) rents. However what became apparent was that it seemed that these issues were not just restricted to those working in the arts. My suspicions were confirmed when I attended the European Forum for Independent Professionals event held at Supermarkt in May 2013. The EFIP’s research demonstrated that Independent working had increased by 82% from 2000-2011 with the number of independent professionals reaching 8.6million in 2011. The establishment of the EFIP sought to address exactly this issue as governments around the EU failed (and still continue) to meet the needs of this new breed of worker either choosing or being forced into a variety of freelance, self-employed or independent work.

A few months later, after discussing these alarming employment trends with Supermarkt co-Founder and Manager Ela Kagel, we decided to organise a 3-day conference entitled WORKAROUND that would flesh out these issues further and provide a physical and mental space for people to find positive and active solutions to our rapidly changing world of work. What was really important for us was to look at the bigger picture and open up the dialogue to include a range of job sectors and create a situation allowing participants themselves to almost create their own content, directed by their own sets of questions, ideas and solutions to existing problems surrounding work, self-employment and self-organisation. What were the ways in which people were working around the traditional paradigms of a capitalist labour market? How were individuals self-organising their time, skills and labour in alternative methods? And how could these new or revived models address some of the challenges of working in an unsupported environment?

The event was ambitious – a limited time frame, a limited budget and a new working relationship between a freelancer (me) and an organisation (Supermarkt) – and something we really wanted to work. Could we reach out beyond the usual Supermarkt audience? Could we create content that would be of benefit to both the local Brunnenviertel as well as the international community? Would our conference format encourage engagement and interest from the participants? And even if we did manage to bring in participants from a variety of different sectors, would they talk and share with one another?

Kicking off the 3-day conference with the Freitagsfruhstuck, we invited speakers that could demonstrate the diversity of work within Supermarkt’s immediate environment of the Brunnenviertel, that there is not one single type of freelancer, and that despite the stereotype of the Brunnenviertel as a cultural dead spot, freelancers here are working around the existing system to create opportunities for themselves and in turn, for others within the community. The morning began with an introductory workshop to freelancing by SOMEWHERE’s Nina Bulsche followed by an empowered presentation by Zehra Özedmir founder & CEO of Destiny Diversity Academy, an informative talk by Heike Fahrnländer from JobKiosk Berlin-Wedding, and an introduction to both mine and Ela’s work for Contemporary Art Exchange and Supermarkt respectively. The morning ended with the creation of an email list so participants could form a regular Stammtisch for local freelancers, entrepreneaurs and self-employed workers – an idea floated by planned speaker Beate Chudowa, Board and active member of Brunnenviertel e.V., who had to cancel due to illness.

For the Saturday we took a more formal approach. Our key-note speakers Social Business Expert Geof Cox and Heike Birkhölzer, CEO of Technologie-Netzwerk Berlin e.V., gave insight into the rise of local and international social movements and the revival of unions, cooperatives and social business models. A series of four short presentations provided examples of alternative working practices, considerations and approaches within the areas of finance, housing, education and the arts. Christophe Guené introduced the Kreditunion as best practice of financial self-empowerment; Dr. Michael LaFond director of id:22 The Institute for Creative Sustainability presented sustainable models of housing and organization; artist and Freelance and Interns’ Rights activist Katja Petrova presented her research and recommendations for problematic internships; and scientist and member of artist collective iCollective Jan Fischer gave his insight into collaboration, community working and the collective’s urban intervention projects.

In the following break out discussion groups led by the speakers, it quickly became apparent that synergies were starting to form between complete strangers, with speakers themselves challenged and presented with new ideas and a range of ethical, philosophical and practical questions.

Christoph’s group discussed today’s lack of access to banking and Kreditunion’s underlying conceptual framework to deal with this through emphasising the importance of social capital and the exchange of self-responsibility in return for professional consultancy. In Katja’s group, personal internship experiences were shared and a consensus reached that more young people need to reach out for support not just to one another, but also to those who can change the situation, by attending conferences on education reform, joining the intern aware campaign, lobbying government and leaders in individual sectors. Jan’s group discussed how collaboration can work between artists, designers, architects and members of the local community; the need to make things real beyond economic structures; and the importance of working from the ground up on community projects. Michael’s group raised the issues inherent in self-organised housing projects such as accountability to the people you live with, good communication, and how being more self-aware of our own individual contributions to the gentrification process.

The last and final day of WORKAROUND was held at the Pfefferberg Cultural Centre and hosted by the Aedes Network Campus Berlin, to give participants (and us!) a change in the physical environment and thus pace of the event. The afternoon featured a more relaxed, informal round table community meeting where invited ImpulsgeberInnen (impulse givers) prompted discussion around the self-management of time, skills and labour. It was truly great to see that so many participants from the first two days of WORKAROUND had returned again (especially on a Sunday afternoon!) to continue unfinished conversations and flesh out newly formed ideas. Four different conversation groups formed around our selected speakers with the participants once again instigating much of the discussion based on their own real life challenges.

Despite it being at times quite an intense conference dealing with a relatively heavy and often political theme, the atmosphere even on the last day was energetic and positive as people shared ideas and potential solutions for the oft seen problems such as the cycle of non- and low-paid labour and the expectancy of freelancers to do it all. The conference came to a close with yet another email swap to continue conversations exploring the idea of creating a model for sustainable working that could benefit various freelance workers from different disciplines.

While Ela and I realise that one conference won’t fix the larger international issues effecting and shaping the world of work today, we feel confident that at the very least WORKAROUND was able to provide a platform, or a catalyst to start a dialogue about how the rigid structures and obstacles in place preventing sustainable, healthy and innovative work practices can be challenged across all sectors. From my own perspective as an arts practitioner, I think it is high time more arts practitioners came together with individuals from other sectors and discussed work issues more openly. What are we so afraid of? That if we share our knowledge, skills, and dare I suggest, collaborate, that it will somehow deplete our autonomy as freelance creatives? Or that being more business minded will somehow compromise our creative abilities? Are we really too proud to share with one another and turn our competitors into colleagues? I don’t know about you, but in reference to Christoph Guené’s presentation, I know I’d much rather bargain together than beg alone.