Blame the Farmer, not the Internsheep 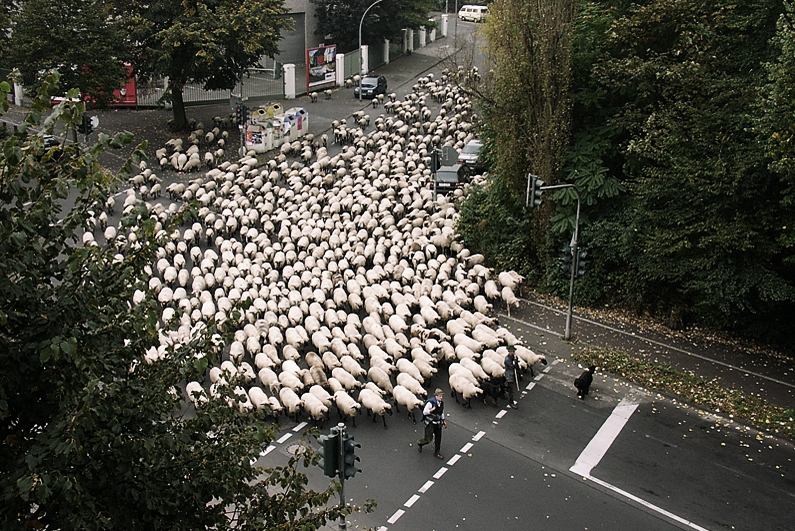 In an extended version of her presentation given at WORKAROUND in October, Katja Petrova’s DIY Masterclass at SUPERMARKT last week raised many important issues and questions regarding the state of interning today both internationally and locally. Rather than being anti-internship, Katja’s research highlighted the widespread rise of the unfair or exploitative internship, and her advice presented solutions for those grappling with the increasing reality of being stuck in the internship cycle of our generation praktikum.

Central to the theme of Katja’s presentation, and something that I as both a prior intern and employer of volunteers wholeheartedly agree with, is the principle that any internship programme, regardless of whether it is paid or not, should always be about what the intern can learn from the organisation, not about what free or cheap labour can be procured. Previously, the internship was something conducted during tertiary education during the semester break of your bachelor or masters studies, or sometimes even incorporated into your studies, often only made possible by student support or parental financial support. Now however, especially in Berlin where unemployment is at 12.4%[1] and entry level positions becoming fewer and fewer, more young graduates are turning to internships to get their foot in the employment door. This is hard enough even with parental or second-job support – I often wonder about those who have neither.

We’ve all heard stories about how large scale corporations have begun firing full-time permanent employees only to replace them with temporary freelance staff and even interns, and now we are starting to see the rising number of non-profits and charities continuing this trend. This is problematic for the job market for three reasons. Firstly, trends such as these reinforce the attitude that it is ok to overlook the value of knowledge accumulated over time by a committed long-term worker in the face of making a bigger profit. Secondly, it places an incredible amount of responsibility on the individual to obtain and excel in a variety of skills related to self-management in order to gain and stay in employment, rather than learning skills related to the job they’re meant to be doing. Often underpaid, precariously working freelancers must now become experts not only in their trade, craft or specialised field, but also in the fields of accounting and legal matters in order to organise their specific pensions, tax payments and health insurance – all things not automatically taken care of as when one is on the payroll. And thirdly, some argue that by fostering a situation where low and unpaid internships become the only way to enter into the workforce, in the long run, that workforce will be represented by and large only by a heterogeneous group of privileged middle to upper-class, excluding the voices of minorities everywhere.

What’s even more concerning is that in the race to find cheap and disposable employees, the intern seems to have become the new freelancer. At the Masterclass, one participant described her experiences of being asked by a Berlin organisation to register as self-employed (selbstständig) so they could avoid writing a contract. Oh, and once she did figure out how to register as self-employed and how to charge for her labour, her invoices were never paid. What’s most disturbing though, in many cases not only are interns ineligible for health insurance and pension schemes due to the fact that they are not legally considered employees, but often they may not even have basic workplace health and safety rights.

One of the main mantras Katja raised was that the intern should never replace an employee. When I heard this I immediately thought of my own experiences as both a volunteer and an intern working within the non-profit contemporary arts sector, and I wondered: what if the employees themselves are not earning decent (or any) wages themselves? Or if the position of employee that the intern is supposedly replacing never even existed in the first place? For example, I’m sure we’ve all worked in galleries or museums where it was never even an option to hire paid staff due to the organisation’s insecure funding structure, or busted a gut grinding it out for a start-up relying on mass intern labour to rapidly develop their new company.

So why aren’t companies offering real jobs to young people anymore? This seems to stem from a perception that the young (despite having qualifications such as bachelors, masters or PhD’s in some cases) are lazy, lack initiative and thus in a climate where financial belts are tightened across multiple sectors, are deemed as simply not worth the risk. Others argue that recent graduates simply lack the soft skills required to work in many work environments. But has it not occurred to these organisations that there are benefits in investing in young staff members, nurturing them and in the long term benefiting from their knowledge rather than losing it every time one intern is shed and another recruited? Surely this repeated hiring and firing of un- or low paid interns is actually losing them money on return on investment? And don’t they realise how damaging this process is to their reputation? …That is if the intern isn’t too paralysed with fear of ruining any future employment prospects to come forward and complain.

However, as Katja illustrated, interns around the world are challenging the status quo in a number of different ways. Through suing their previous employers with legal suits claiming back their owed wages on the grounds that they were actually performing the function of a paid employee, and though joining internship rights groups naming and shaming unfair and exploitative internship providers and empowering others to do the same. Now, this is all incredibly inspiring and I for one am glad to help. But as I listened to these cases of interns turned activists, I couldn’t help but wonder: what about employer responsibility? Shouldn’t we also be asking those who are creating these precarious working conditions in the first place to account for their actions?

Despite the DIY Masterclass having highlighted the negative situation facing those entering the workforce the workshop ended on a positive note with Nicolas’ presentation about his new company InternsGoPro, which aims to make the process of offering and delivering internship programmes more transparent and accountable, and a discussion about what we as participants could do to help continue these kinds of awareness raising campaigns. There is further hope with the recent announcement by the CDU and SPD to support new guidelines for paid internships here in Germany, however I believe we don’t just need internship awareness campaigns and the training of young people in how to avoid exploitative working situations. We also need better training and education of employers in the value in employing young people as interns and as employees. While my days of interning are long gone, I look forward to the developments towards creating better working conditions for the next generation of workers.

[1] In January 2013, a total of 219 071 persons in Berlin were registered unemployed, which is equivalent to a rate of 12.4%, the national unemployment rate being 7.4%. This represents a year-on-year decrease of 9 117, or 0.8%. The capital’s unemployment rate is thus the third-highest in Germany. Source.

Blame the Farmer, not the Internsheep