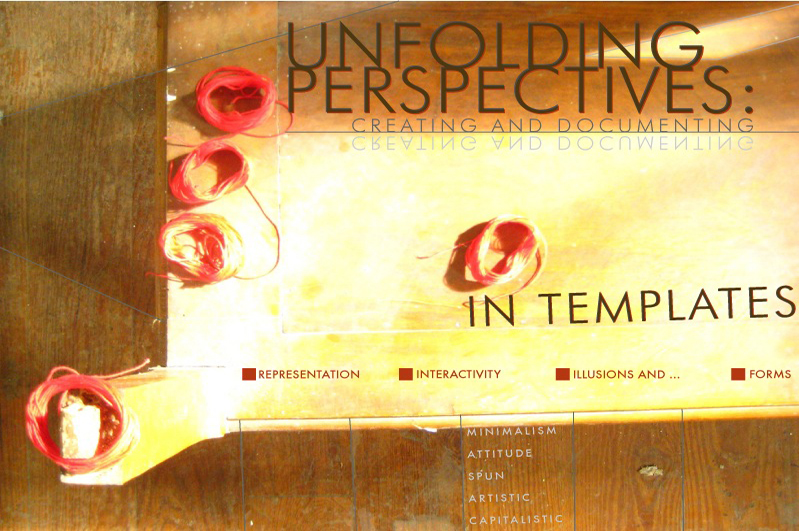 The workshop Unfolding Perspectives: Creating and Documenting in Templates will take place at SUPERMARKT this Friday 28 February 2014 from 2-5pm, hosted by Gretchen Blegen and Jurriaan Pots. In this blogpost, Gretchen Blegen speaks of the inspirations behind the theme of the workshop and the various phases of research which have led up to this event.

Take One: A Journey

During the past two months I have been investigating the means, intentions and approaches of digital and physical forms of documentation as often represented through templates.  Personally interested in the questionable approach of documenting performative works or ‘happenings’, and the fine line between journalistic documentation and aesthetic representation, I reached out to Jurriaan Pots (a fellow colleague of SUPERMARKT based in Amsterdam) last November in hopes of finding another individual with whom I could expand this theme into the frame of a workshop. With his focus on digital media and (artistic) behavior, Jurriaan, quickly became a companion in this journey and as an introduction (and invitation) to our workshop this Friday 28 February at SUPERMARKT, I would like to now share some of our findings and intentions.

Coming from a background of curiosity and personal interest rather than academic merit, we decided to open a communal folder in which we could share articles, books, essays, websites and artists which we found relevant to theme of documentation and representation. This not only encouraged a constant flow of information – it also helped to link different sources and understandings of the subject matter in unexpected ways. Some categories that have presented themselves in the course of our research are:  template aesthetics, expression and behavior of documentation in relation to freedom and possibilities, analog and digital subcultures, and internet platforms and politics. As stated, the content of our findings allows an interesting amount of cross-over and the full list of resources can be publicly accessed in the Dropbox folder here.

After a month or so of shared research, we decided to put the question of creating documentation into practice.  In retrospect, I could say that we were and still are tying to unveil an answer in the form of praxis. In January we started making miniature-documentation projects in order to have a more hands-on approach to our study. Acknowledging the daily routine (der Alltag) we simply looked at different aspects of our unfolding lives and formed them into composed documentations which we then shared with one another. We wanted to approach the template as a medium itself. A simple approach however, still delivers interesting results. Our findings were titled: ‘Commuting Annoyances’ and ‘Rough Cut on Turbulence’. Jurriaan’s first exploration consisted of his daily commute to and from work in Amsterdam, and mine used a daily exchange of words, drawings and photographs between another close companion and myself. In the process of deliverance, it became more apparent how quickly one is submitted to comply to the frame of a template when sharing information in the virtual world. 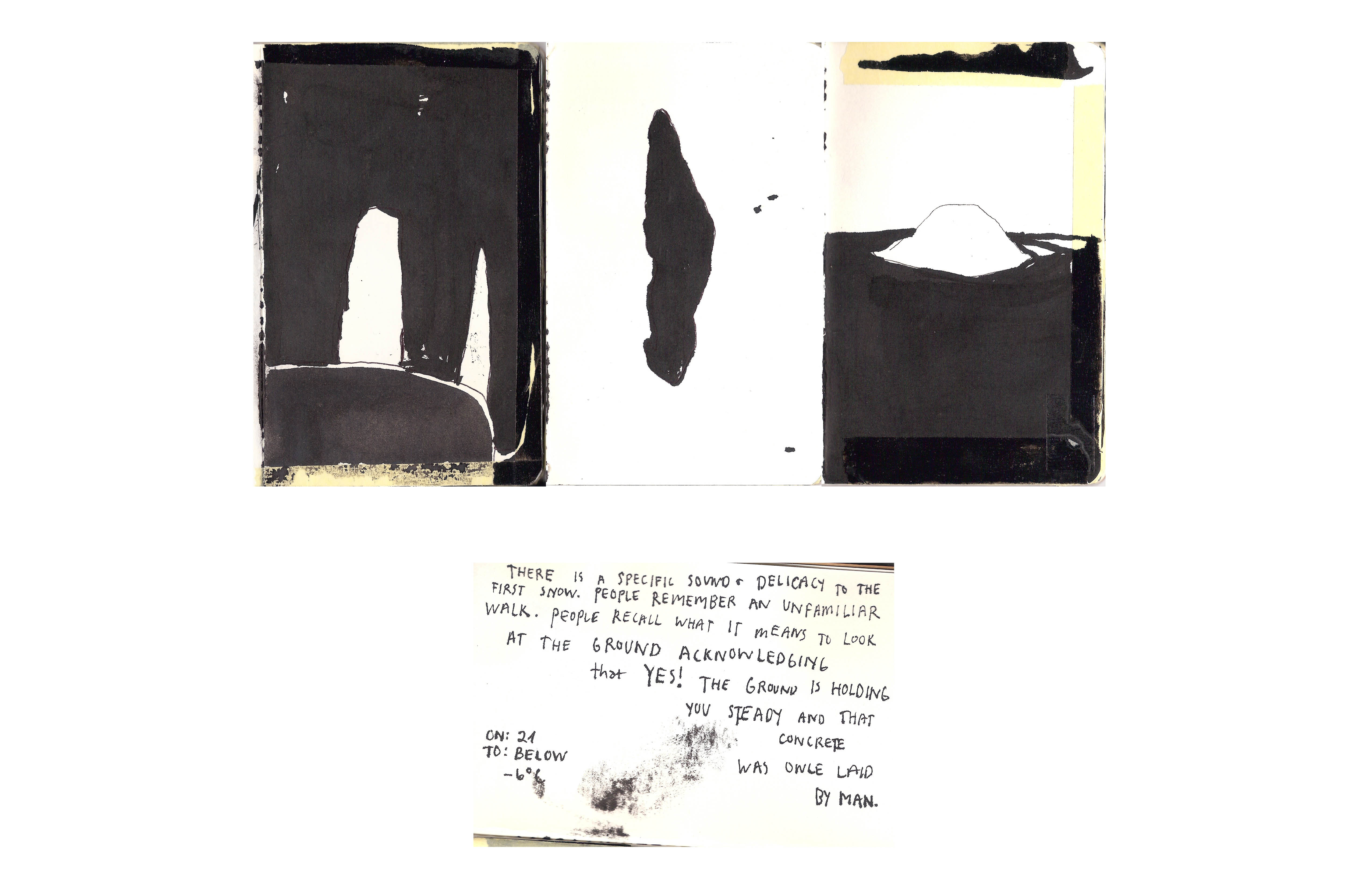 Compelled to follow this praxis and rhythm further, we decided to keep its simplicity, but change its form. During the next two weeks Jurriaan sent me text messages of his sporadic thoughts and observations and I collected them as data. Looking at the world in a dream-like state, as if through the eyes of the Flaneur or the Voyeur, I learned to appreciate such an exchange of language in its fragmented form. After all, many of the social streams (Facebook, Twitter, etc.,) that are typically used in an everyday exchange of words or information consist of just that – fragments. The departing thoughts of the dreamer have always played an interesting role in society and in the course of history – what role do they play now? As a figure normally found in the shadows of the night, my response became a reflection, and I started to wonder how incomplete forms of representation can have more context and meaning.  How do fragments begin to represent the whole?

Some of the the messages I received in the course of the given time period were:
“my environment often shakes and rumble”
“through all the struggles and imperfections, the memory keeps working flawlessly”
“I looked out of the window and realized that, although the landscape is open and bright, there is a highway close by”

As a response I took on the role of the flaneur myself and starting placing these fragmented texts into my environmental observations. The outcome presented itself as a challenge and at the end, I weaved these fragments out of the digital world and into the realms of prose. The following excerpt is from a formatted interpretation and functions as a small perspective of illumination (to view the full text, you can visit the Dropbox folder).

The notion of arrival crossed my mind today. I was walking alongside the river and I took note of the amount of ducks bathing on a spring day in Berlin. I took note of their mechanisms of cleansing:  from brushing to scratching, jumping to diving and from landing to departure – bathing is inherent to their lifestyle.  Above all, I took note of time and their perfect timing. 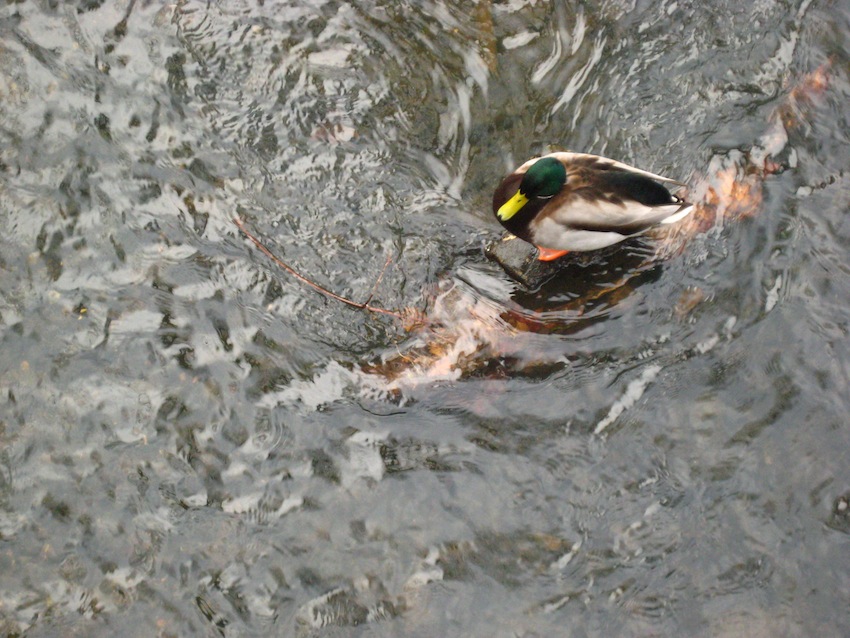 I start to walk.

On days like these, when I prove my patience with time, I have to wonder what other inhabitants of the city are doing: are they too watching the ducks, or are they feeding them? Are they watching the sun underneath the clouds – creating choreography of shifting shapes? Or are they sleeping – listening to a soft murmur of background noise with a faint recollection of the Sims?  I take a few steps forward and look out at the lakeside. It appears as a metropolis.  And I wonder – have people from the city center ever been here?

For the purpose of the workshop on Friday, we would like to incorporate the theoretical with the practical in order to see and explore other forms, approaches and viewpoints circulating around this theme of ‘templated documentation’. Unfolding this subject matter is certainly not limited to our approach of the everyday (‘here & now’) scenario – this theme spreads into diverse worlds of societal development, political uprisings, individual/communal identity and as technology advances, its mechanisms continue to evolve and expand – but on Friday we would like to keep it simple. In order to gain a personal perspective on how these sources of communication influence our lives in everyday interaction, we will explore how they are made and at the end, discuss how they unravel into more immediate matters.  The workshop begins at 2pm on the 28 February and we would be pleased to unfold other findings with and amongst new faces.

Due to the recent uprisings and political warfare in the Ukraine and in Venezuela, I feel it is necessary to additionally incorporate, or at least emphasize the importance of these ‘virtual geographies’ in our everyday lives as a source of journalistic reportage. Although myself and Jurriaan chose to not directly link this aspect of creating and documenting to this specific workshop, we would certainly not shy away from any discussion or personal interest regarding a more politicized or activist approach to this theme.

Unfolding Perspectives: Creating and Documenting in Templates will take place this Friday 28 February 2014 from 2-5pm. To attend this free workshop please send a short RSVP to rsvp@supermarkt-berlin.net.