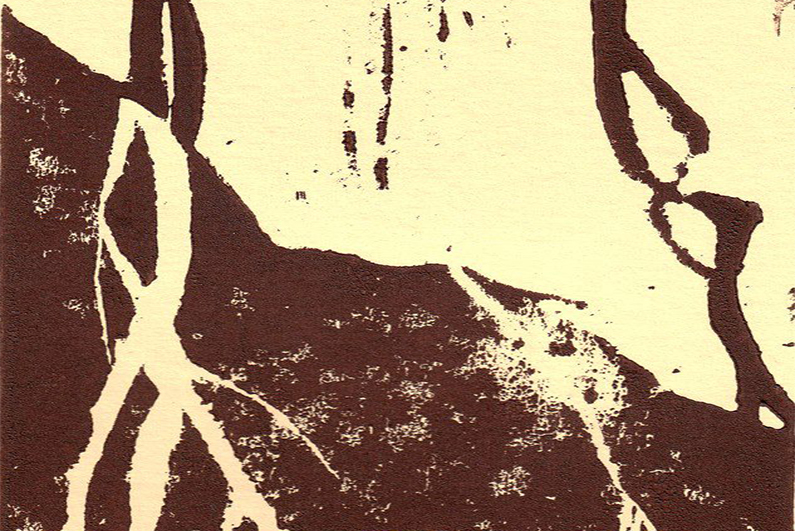 Printmaking stands as one of the oldest forms of visual reproduction in the world. Varied in material, technique, and cultural practice, printmaking plants the roots of visual and written exchange. As a old medium of great versatility, printmaking allowed the individual to take creative reproduction into their own hands and show it to the world. It gave way to handwork that was not necessarily fine art or crafty, but rather present and relevant to the here and now. For this reason among others, printmaking emerged as defining graphic contributor to many DIY cultures and continues to uphold certain ties to such movements.

Negative/Positive will focus on two techniques belonging to printmaking which are accessible to the public without the need of studio equipment – on woodcuts and monoprints. Woodcuts are a form of relief printing – carving out the negative space of the image in wood or in linoleum, then inking and printing the final piece with physical pressure of the hand. Monoprinting is a paradox – it is the one form of printmaking that is not reproducible, but still linked with the same process of drawing, inking and printing.

Looking at a traditional practice of printing in a time where the print itself is dying forces us to question roots and origins of physical exchange and reproduction in a increasingly digital world. How does the physicality of making and holding a print belong to the DIY culture? How does the virtual image defend itself in the modern-day approach of Open Source sharing? Does the ‘here and now’ of a work of art still generate a genuine uniqueness or is the question of mechanical reproduction already a theme of the past?

The workshop will include a brief discussion, instructions on both techniques, supplies and time for the participants to create and print their own prints.

Cost: The workshop is open to the public with a suggested donation of 4€ – to reserve your place please email rsvp[a]supermarkt-berlin.net

Language: The instructive language of the workshop will be English

Presenter: Gretchen Sigrid Blegen graduated with a Bachelors of Fine Arts from Colorado State University in 2010. As a firm supporter of DIY aesthetic and practice, she has been active in a numerous amount of independent non-profits and DIY spaces in the Southwestern region of the United States (Ventero Open Press, Matter Bookstore, TITWRENCH FEST, Hammertime Tool Co-op). Living and working in Berlin since September of 2011, Gretchen continues to support this exchange of ideas, experimentation, information and skills on a communal level in and outside of Berlin (Ausland-Berlin, Ponderosa Tanzland, Lucky Trimmer, AADK). Recognising the process and not the product as a key to progressive and creative thinking, her personal as well as collaborative projects are rooted in a continuous loop or an ongoing open discussion and exchange.

“Even with the most perfect reproduction, one thing stands out: the here and now of the work of art – its unique existence in the place where it is at this moment…..That includes not only the changes it has undergone in its physical structure over the course of time; it also includes the fluctuating conditions of ownership through which it may have passed.” – Walter Benjamin, The Work of Art in the Age of Mechanical Reproduction (2008)