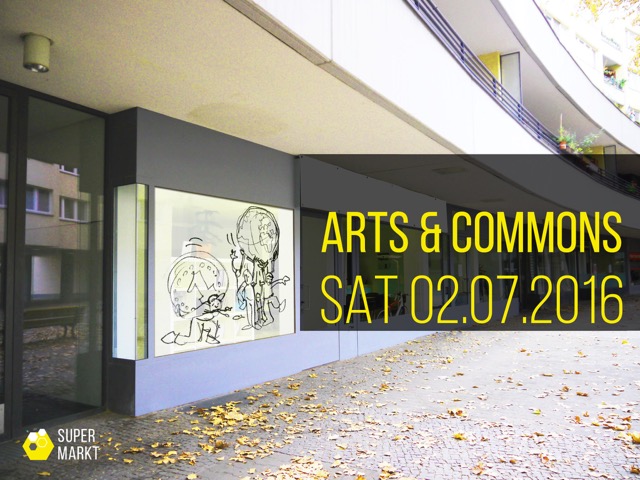 Welcome to the era of Digital Capitalism! The production of goods is no longer a priority. Instead, digital information is becoming the prime asset of today’s economy. Networked platforms have replaced the factories of the industrial age. Traditional standards of production, work and value are currently being reconfigured. Even our understanding of social values, aesthetics and culture is increasingly shaped by the new paradigms of digital economy.
What are artists’ responses towards this ground shaking dynamics which hasn’t just captured the realm of economy, but our society at large?

Over the course of six events, we will explore new forms of financing and value creation of cultural & artistic projects through means of collaboration, commoning and making intelligent use of emerging digital technologies & practices.

Our launch event focuses on the development of commons-based economies within the Berlin arts scene. What are the options of building self-organized infrastructures that generate more independence, variety, justice and autonomy among artists? On July 2nd, artists, hackers, commons-experts and collaborative economy insiders will work on a model for a commons for arts – together with you!

1pm: Doors Open
2pm: Welcome & Presentation of the speakers and their topics
3-6pm: Community Q & A
Meet your favourite speakers in two informal break-out rounds of 90 minutes in order to collaboratively work on your questions and ideas. Get inspired by the speaker’s input and take the opportunity to rethink arts economics in a friendly, open atmosphere.
6-7pm: The Küchenprekariat is serving snacks
7-9pm: Co-Creating the Commons
Presentation of the results of each workgroup, feedback and outlook on the further development of models & infrastructures
From 9pm: Drinks and conversations at the bar

LANGUAGE:
In the workgroups: English / German, based on the preferences of the participants.
In the closing panel: English. However, any comments and questions are welcome in German as well.

Participation at this event is free. However, you are kindly asked to register your seat.

More info on “Art, Money and Self Organization in Digital Capitalism”here!

Wibke Behrens, M.A., is part of the neue Gesellschaft für bildende Kunst (nGbK) since many years. In 2012, she became spokeswoman of the Koalition der Freien Szene, where she has, among other activities, co-led the campaign “Freie Szene stärken” (strengthening the local scene) and takes care of the finances. Also since 2012, she is spokeswoman for the Kulturpolitischen Gesellschaft (KuPoGe) for Berlin+Brandenburg. Wibke consults a broad range of projects in the realm of cultural management and politics-focused adult education, for example for the Goethe Institut. She is a contributor to the study on „cultural-political challenges for Berlin“, which was commissioned by the Stiftung Zukunft. Wibke’s professional activities are based on a profoundly curious interest in systemic structures and processes of self-empowerment, cognition and self-organization.

Sophie Bloemen is an activist and policy adviser based in Berlin. She co-directs Commons Network a civil society initiative based in Berlin and Brussels, which focused on bringing the commons perspective to policy. She has worked as a policy advocate and a public interest consultant for various NGOs in the global policy environment on health and trade. She has been active in European cultural grass root civil society on the exchange of ideas and new visions for Europe, and writes articles and papers on a variety of issues. Sophie currently coordinates projects on renewable energy, Internet, heath R&D and the collaborative economy. She has degrees in philosophy, political economy and International Relations.

Ruth Catlow is an artist, curator, organiser and writer who works with emancipatory network cultures, practices and poetics. She is co-founder/co-director of Furtherfield, an artist led international community hub for art shows, labs and debates around critical questions in arts, technology and society. Furtherfield’s Art Data Money programme seeks to develop new economies for arts in the network age.  Catlow’s artistic commissions include Time Is Speeding Up at 20-21 Visual Arts Centre; Sociality-machine at Tate Britain; Play the Web We Want at Southbank Centre; Rethinking Wargames- 3 Player Chess, currently on tour as part of Free Play with ICI. Catlow is named by the Foundation for P2P alternatives in their list of 100 women Co-creating the P2P society.

Silke Helfrich is author and commons-activist, blogger and public speaker. She lives and works in Jena. Silke is founding member of the Commons-Institut e.V. and, together with David Bollier and Michel Bauwens, of the Commons Strategies Group. She publishes the German-speaking CommonsBlog. Silke is author of various publications on the Commons, such as: »Wem gehört die Welt?« (2009) and »Was mehr wird, wenn wir teilen« (Elinor Ostrom, 2011). Together with David Bollier she writes a book series about the Welt der Commons.

Sam Muirhead is a filmmaker and activist working to push the collaborative, transparent, and ethical ideas of the Free/Libre Open Source movement into new areas and wider society. In 2012 he lived an experimental ‘[Year of Open Source](Fehler! Linkverweis ungültig., applying the concept to every aspect of his life, from furniture, to music, even to underwear. Since then he has been helping people understand community building and open source hardware business models with [Open It Agency](http://openitagency.eu), growing a global network around the idea of an [Open Source Circular Economy](https://oscedays.org), making [videos and animations](http://cameralibre.cc) for Open Knowledge, Wikimedia, Fab10, Edgeryders and the UNDP, directing the [POC21 documentary](http://cameralibre.cc/POC21) on open source hardware for sustainability, and developing a practice for co-creating and customizing open source animation. He is @cameralibre on Twitter.

Dmytri Kleiner is a software developer and the author of The Telekommunist Manifesto. Dmytri is a contributing artist to the Miscommunication Technologies continuing series of artworks by Telekommunisten, such as deadSwap, Thimbl, R15N and OCTO. Miscommunication Technologies address the social relations embedded in communications platforms by bringing aspects which are normally hidden from view to the foreground to be critically experienced and confronted. In The Telekommunist Manifesto, Kleiner has published the Peer-Production license a commons-friendly license the author has described as CopyFarLeft, and proposed Venture Communism, a mode of worker-controlled production modeled on peer networks and the pastoral commons.

Genevieve Parkes is software developer with a background in arts event management and climate activism in New Zealand. As member of the Enspiral Network she is currently exploring how technology and finance can inter-play in collaboratively governed organisations.

Elena Veljanovska is a freelance curator and cultural worker. She works actively since 2003 on initiating cultural projects and exhibitions. She is using the curatorial practice as a tool for critical engagement and for creating a discourse necessary for problematizing issues in the wide artistic field. Her specific interests and inspirations come from the fields of art and technology, public art and socially engaged practices. She works and lives in Berlin, Germany. (http://veljanovskaelena.weebly.com/)

Krystian Woznicki founded in 1999 the Internet-Newspaper Berliner Gazette, which he today runs together with a collective of journalists, researchers, artists, programmers and activists. Under his direction the Berliner Gazette established itself as an experimental platform – building brigdes between formats (online and offline), academic disciplines, cultural milieus, expert circles or age groups bringing together more than 800 authors. In this context he organised more than 50 conferences and workshops. Outside the Berliner Gazette Woznicki curated international projects and exhibitions at the intersection of critical culture, politics and the digital revolution. Woznicki has extensively published on globalisation and digitalisation, in German, English and qua translation in five other languages. He is author/editor of more than ten monographs/readers including „Abschalten“ (2008), „Vernetzt“ (2009), „Modell Autodidakt“ (2011, zus. mit Magdalena Taube) and „Komplizen“ (2014, with Magdalena Taube).