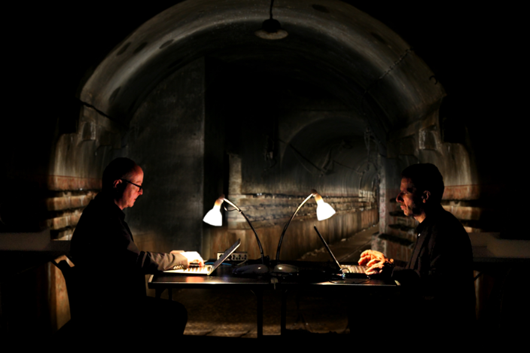 An electro-acoustic concert of computer-generated sounds and noise composition

Imagine the setting: two musicians sit on opposite sides of a table at the centre of the dimly lit room, the audience members surround them. A 4-channel sound system amplifies their experimental sound design, using computer-generated sounds and electro-acoustic noise composition to create an immersive and hypnotic experience for the listener, the idiosyncrasies of the soundscape audible at any point in the room.

Radikal Audio Lab create and perform electro-acoustic music, computer-generated sounds and noise-based compositions. Frank Niehusmann and Clemens von Reusner started their collaboration as Radikal Audio Lab in 2008 when they produced their first multi-channel composition for the New Music department of the Frankfurt-based German broadcaster Hessischer Rundfunk. Drawing inspiration from Musique Concrete, a style of music in which sounds of technology (such as the speakers) and the environment (including static and reverb), become intrinsic parts of the composition, they have since released numerous internationally-acclaimed compositions and albums. For their dynamic live performance, Niehusmann and von Reusner work with a multi-channel audio-system in a bespoke computer network and software, an interactive graphical score composed live on screen. They create live versions of their compositions using live-sampling, looping and overdubbing techniques, unique for each and every live performance.

Join us for a unique concert environment and an intimate night of experimental electro-acoustic music. Experience Supermarkt as it’s never sounded before.

Time: Performance commences at 8pm, and lasts for 60 minutes with no interval
Cost: Free entry. Drinks and refreshments available for purchase from the Supermarkt bar
Facebook event: http://on.fb.me/1fgsYm3