POSTPONED: Subvertising for the Right to Housing 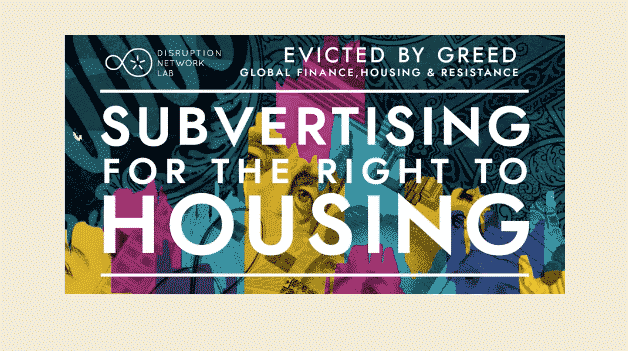 Workshop by Disruption Network Lab: Subvertising for the Right to Housing

This workshop shows how subvertising offers a creative way to rewrite the narrative about the housing market in the streets where gentrification operates. Outdoor advertising is the most emblematic form of consumerist propaganda. It privatises sections of public spaces with the purpose to conditioning mass behaviours imposing specific narratives. How can we untangle those narrations? And how can we take over those spaces subtracted from the public realm for private interests?

STEAL THIS POSTER is a group of visual artists whose work is mainly focused on subvertising. With their designs they contributed to the creation of an online archive of political posters free of copyrights called Stealthisposter.org, which was recently presented at the Museum of Contemporary Art – MACRO in Rome. The aim of the archive is to become a network for designers that offer their works to radical political groups. With Special Patrol Group, a collective of subvertisers from London, they took part in several subvertising workshops in many different cities.

More about STEAL THIS POSTER.
https://stealthisposter.org/

This workshop is a co-production between the Disruption Network Lab & Supermarkt Berlin and it is part of Re-Imagine Europe, co-funded by the Creative Europe Programme of the European Union. In cooperation with STEAL THIS POSTER and Kunstblock And Beyond.