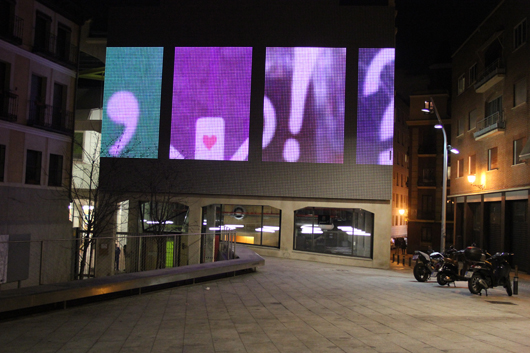 How can we collectively create a city-alphabet? Which characters, logos and tags make the Brunnen neighborhood unique? How to send personalized messages with the app? During the ‘Urban Alphabets’ Workshop, the artist Suse Miessner introduces her smartphone app and invites the participants to contribute to the Berlin city-alphabet. The ‘Urban Alphabets’ workshop draws the attention of the citizens to their physical environment and invites them to actively shape it. The typographic elements are collected in physical space, categorized in the digital space and shown from September 12 to 14 from 19h30 clock during the screening.

This Workshop is part of CONNECTING CITIES: URBAN REFLECTIONS within Kuturfestival Wedding-Moabit 2014.

Bio
Suse Miessner is an artist, designer and researcher who lives and works in Helsinki. In her work she is interested in the relationship between technology and the behaviour of people in public spaces. Miessner has an interdisciplinary background in architecture and new media and studied at the Bauhaus-Universität Weimar and at the Media Lab Helsinki. Since 2010, she researches and analyzes, in various projects and installations the connections between space, society, media and technology. Their project, ‘Urban Alphabets’ is a smartphone app that explores the space and involves the user in an interaction with his/her environment.

Initiated by Public Art Lab and the Connecting Cities Network in cooperation with SUPERMARKT in the framework of Kulturfestivals Wedding Moabit, funded by the Culture Programme 2007-13 of the European Union