Commonspoly – Play with us! 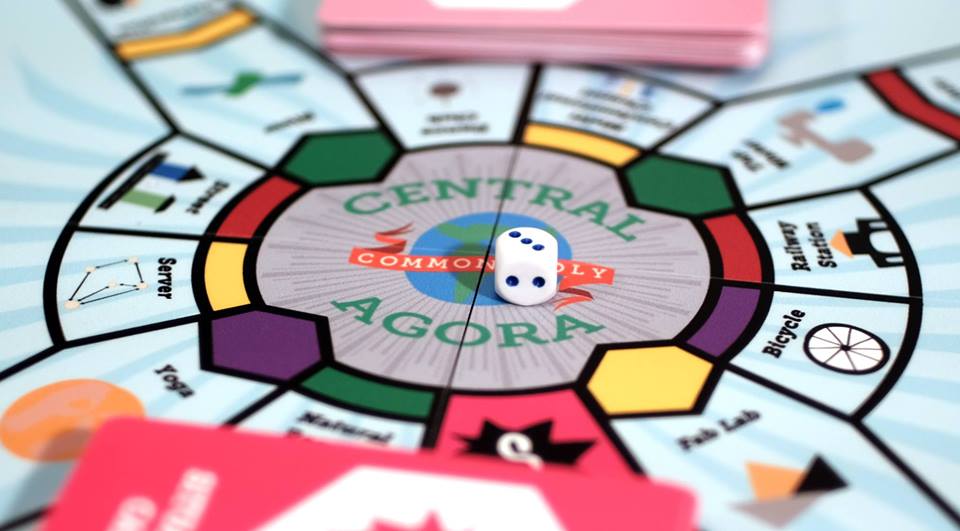 Commonspoly is a hack and a critique of the game Monopoly. Players aim first to re-municipalize private goods and then turn them into a Commons – you’ll learn why this is the best strategy while playing the game. Rather than compete against each other, players must overcome their conditioning and ‘rational, self-interest’ to instead maximize cooperative behaviours and create a commons-oriented locality. Who wins? Everyone in the community! Unless the speculators take over…which we must fight at all costs. United we stand!

Join Stacco Troncoso and Ann Marie Utratel from P2P Foundation to play Commonspoly– the resource-access game where we win by working as a community. Sign up though the comment section here or through this Facebook event (yes, we hate Facebook too, but we had to do this short notice).

Hi there, we hope you had a safe journey, welcome to Commonspoly’s utopia!

Commonspoly is a free licensed board game that was created to reflect on the possibilities and limits of the commons as a critical discourse towards relevant changes in society, but to do it playfully. This game is an ideal device to introduce commons theories to groups in a pedagogical and enjoyable way. But it’s also great for boring, rainy afternoons!

And another thing, Commonspoly is an attempt to repair a misunderstanding that has lasted for more than a century. Back in 1904 Elizabeth Magie patented The Landlord’s Game: a board game to warn about, and hopefully prevent, the dangerous effects of monopolism. Years later she sold the patent to Parker Brothers, who turned the game into the Monopoly we know today: a game that celebrates huge economic accumulation and the bankruptcy of anyone but you.

Commonspoly turns the basic features of the traditional game upside down in an effort to imagine a possible world based on cooperation instead of competition. But is it possible to play a board game where the players have to find ways to work together, not beat each other? Well, the cycles between financial crises are shortening, global unemployment rates are skyrocketing, ice caps are melting, and we all have that hard-to-explain, creepy feeling… In this game, it’s a race against time and every player’s help is more than welcome! It’s not all bad news – we have some powerful, community-based tools to use in this struggle against the apocalypse. Let’s get down to business: we have urban, environmental, health and knowledge-based common goods to preserve!

We are working on a new version, which is going to be available this summer. Feel free to contact us if you have any questions: hello@commonspoly.cc