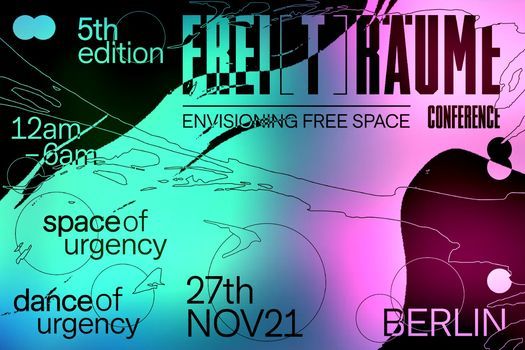 Who does time belong to? It’s the 2020s and the world is about to explode. Its inhabitants are ordered to spend a third of their lives in bullshit jobs that worsen the catastrophe. If our present is Cyberpunk (Akira and Blade Runner were set in 2019), who are the renegades working against prescriptive normativity and towards liberatory, restorative futures?
Join us for a ride through time, entropy and creative, open source rebellion. We are the ones we were waiting for. The time to act is now.
About Frei(t)räume conference
More info on the program and speakers here: https://envisioningfree.space/about/

It is the end of 2021. We are in a paradigm shift modus, returning from digital to analogue. We have been restricted for 2 years, prevented from socializing and interacting through dance. Now, our cultural free spaces are re-opening for nightly physical interactions and excess, introducing a new era of self expression. Nevertheless, the extermination of our self-organized free spaces is accelerated. We remain unsupported and mostly unrecognized by local governments, even as it is clear that self-organized culture will play a crucial role in facing the global crises to come. Are we really reflecting & adapting? Are we in a rush to continue as we did before? Are our spaces and communities resilient enough for the next crises? Which role does dance, protest & reclaiming freedom of movement play to create the futures we need? The time is now to look into the historical and contemporary examples to put things in perspective and build bridges between activists, artists, political agents, urban changemakers and push reunification for meaningful alliances to enhance our resilience.

That is why on Saturday the 27th of November, Space of Urgency, Actors of Urban Change & United We Stream join forces to facilitate a process of deep adaptation & exploration on D.I.Y. tools for RECLAIMING URBAN SPACE, Dancing, protest & amplification of movements during Post & Pre-pandemics,  DECENTRALIZED, DISTRIBUTED SELF-GOVERNANCE, Disruptive Technologies, Digital VS Analogue Urgencies, Artistic identity & the rise of NFT`s, QUEER & FEMINIST LIBERATION FROM EAST TO WEST, Decolonizing artist booking & event curation, Modeling SOLIDARITY, COMMUNITY CARE & leading the SOCIO-ECOLOGICAL TRANSITION – creating concrete demands & recommendations for the regenerative return of our international culture & arts community. Only together can we reflect, develop resilience strategies and powerful tools to face the current/future crises and protect our cultural free spaces and the values that form them.

We invite you to join us for an intellectual and artistic reclamation of our futures, to challenging discussions and celebrations of radical self-expression. From dawn to dusk, workshops, talks and panels are seamlessly punctuated with nightly exploration of sounds, visuals and performances curated by the networks of Dance of Urgency  & Space of Urgency and narrated by more than 30 artists and spaces of urgency from Amsterdam, Athens, Barcelona, Belgrade, Berlin, Budapest, Haifa, Kampala, Kiev, Lisbon, London, Mexico City, Milan, Moscow, Paris, Ramallah, Santiago, Sarajevo, Tbilisi and many more.

From 2016 to now, main curator Liese Kingma from the Space of Urgency platform and co-curator Bogomir Doringer of the ongoing Dance of Urgency research have been working in direct partnership with the Stadt nach Acht Conference, which this year connects its program on the 25-26 November in Berlin, a city where club culture ignites urban transformation.