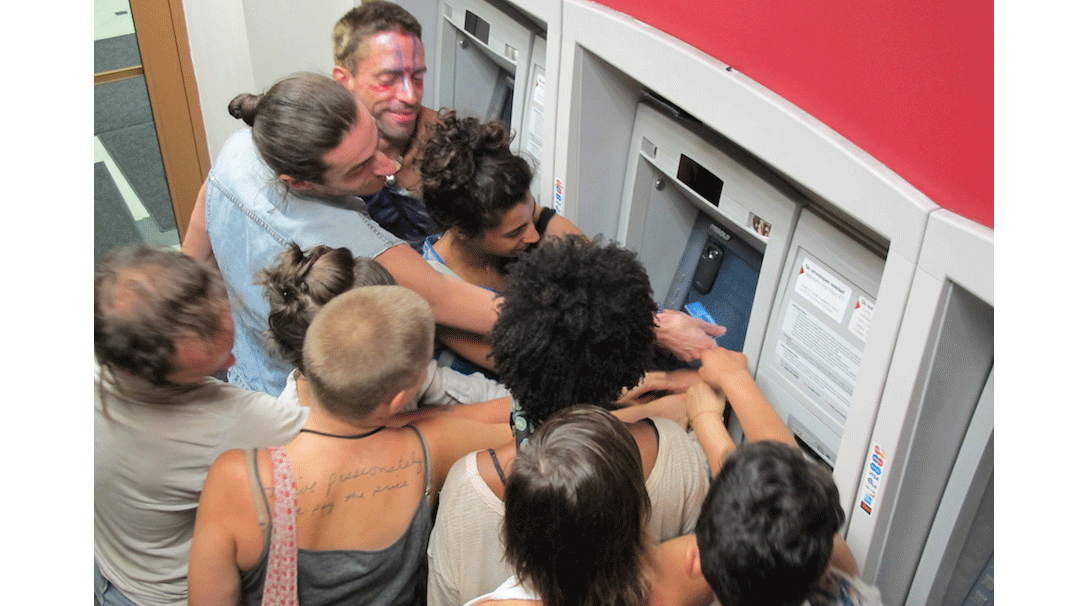 How can artists, creative labourers and cultural producers survive within the increasingly austere and competitive institutions, structures and systems of financialized capitalism? How are they revolting against them and mobilizing sabotage, antagonism and creative destruction from below? And what visions and practices are being generated to prepare the way beyond this dire situation? Today, in an age of cognitive capitalism that seeks to harness social life to the engine of destructive “growth,“ art and creative fields have become laboratories for new methods of exploitation and profit generation, from gentrification to artificial intelligence, from precarious labour to the mining of social and affective data. What can art offer in an age of rising economic and political authoritarianisms?

We therefore invite anyone with a stake in such struggles to join us on the evening of November 3 for a two-part discussion and workshop. We begin with a conversation about these themes and problems, putting into dialogue and debate strategies WITHIN, AGAINST and BEYOND. Following a short break we will divide into working groups to pursue a discussion of specific tactics through which “artists” can challenge financialized neoliberal capitalism.

This event is presented on the occasion of the publication of Max Haiven’s book „Art After Money, Money After Art: Creative Strategies Against Financialization“ (Pluto Press), in the context of SUPERMARKT’s ongoing series of conversations about art, money and commons, and as a warm-up event for the Berliner Gazette’s annual conference AMBIENT REVOLTS (Nov 7-10 at ZK/U).

People who are interested in participating please get back to Ela Kagel under the following email: rsvp@supermarkt-berlin.net

The state of art when it comes to money is grim.

Let’s take the visual arts for an example. The vast majority of those who consider themselves artists, and even of those who are recognized by their peers to be creating excellent work, will end up, in net financial terms, subsidizing their own careers, usually compelled to work in the service sector. This is in spite of the booming market for “contemporary art”, driven by the global growth in the number of “high net worth individuals” who are the byproduct and beneficiaries of rising global inequality. But for whom is the market booming? Indeed, the tastes of the world’s super-elite seem everywhere to have a corrosive effect on artists’ autonomy. Even in jurisdictions where government funding for art has withstood neoliberal cutbacks, gaining such support increasingly demands artists and organizations waste time with endless applications and compete with one another to prove their projects will have significant instrumentalized derivative impacts and benefits. In an age of the so-called “creative economy” and the “creative class” artists have seen themselves used as pawns in a speculative gentrification game, as “pioneers” to open up new areas for investment, or as “model workers” who embrace their precarity, leverage their networks and sell their passion in the brave new “gig economy.” At the same time, artists, especially political artists, have become a useful target of right-wing revenge politics that lumps them in with economic elites who are misappropriating the tax dollars of an increasingly unequal society. And in any case, in times of growing reactionary, far-right politics, what good can art still do?

But why cry for artists? We should be under no illusions: art and money have always been connected, ever since a distinct notion of “art” emerged in the 16th and 17th century to meet the demands of the ascendant moneyed capitalist class. Even so, today the financialization and instrumentalization of art presents new problems for those who would imagine art as a form of activism against neoliberal capitalism. It’s not only that art has become a speculative asset to be exploited by financiers, or that art institutions are manipulated by governments as a means to an ends. It is also that each of us is made to adopt the mask or the soul of the speculator, the investor or the entrepreneur and compete with one another for attention and opportunities. And only a handful will “make it.“

The concern here is not the fate of artists or art; their miseries pale in comparison to those who must endure unchosen statelessness, racial oppression and endemic poverty, though many artists also experience these oppressions. But what cannot be avoided today is that, in spite of the intentions of the artist, art is increasingly part of the circuits by which systems, structures, institutions and forms of wealth are being reproduced, often (indeed, usually), at the expense of the artist themselves. Complicity is mandatory. In this sense, whatever else we can say about art today, we can at least note that the term should sensitize us to emergent forms of exploitation and novel modes of resistance. This is, of course, true not only for visual artists but most of those who work for a living (or work but can’t make a living) in the so-called cultural or creative industries.

There are a wide range of radical responses to this situation. “Radical” here means an approach that understands these problems as deeply rooted in the chaotic structures of capitalism and neoliberalism, which means also recognizing the way these systems have always been intertwined with racism, sexism, colonialism, ablism and other forms of oppression.

For the sake of conversation, we can frame these radical approaches as those struggling within, against and beyond the institutions, systems and structures of financialized, neoliberal capitalism, which would turn art towards their own reproduction.

WITHIN: Such approaches seek to carve out a space within existing institutions and systems, often to preserve or take advantage of some resources or redirect them to other ends, or to other communities. Struggles within are not simply self-serving survival strategies; they are strategic engagements that maintain a radical sets of objectives and values grounded in real relationships with those outside.

AGAINST: There is a long tradition of antagonism towards dominant (even seemingly benevolent) institutions, structures and systems, no less so today when even the most enlightened of them seem increasingly complicit. Strategies against often imagine that such antagonism might help quicken the pace or possibility of more profound, wide-reaching and radical social transformation.

Facilitator of  the AGAINST breakout group:
Elena Veljanovska/ Freelance Curator and Cultural Manager

BEYOND: What will come next? Some dedicate their time and energy to experimenting or “prefiguring” future practices, relationships and institutions, developing the protocols for new, post-revolutionary or post-apocalyptic institutions, structures and systems: new currencies, new habits of conviviality, new methodologies of collaboration and care.

Facilitator of the BEYOND breakout group:
Lenara Verle/ artist and researcher with a focus on community, money und collaboration, founder of Coinspiration.

Of course, most of us practice many strategies at once. Nonetheless, this framing can hopefully offer us some structure for a series of conversations about developing and sustaining radical visions for culture, creativity and the imagination in the days to come.

„Art After Money, Money After Art: Creative Strategies Against Financialization“ (AaMMaA) explores the work on contemporary artists on the ragged edges of conventional “art” practice who use money as a medium of creative and critical expression. Through an examination of this work, which engages with cash and credit, debt, derivatives and other manifestations of money, we can better understand our current moment of “financialization”: the increasing domination of the economy and social life by the financial sector. Written for activists, artists and art professionals and scholars, AaMMaA pivots on the controversial claim that both money and art must be abolished if we want a truly creative economy, which is to say an economy where everyone’s imagination can thrive.

AaMMaA features and examines the work of dozens of artists. Chapter one explores the strategies of artists who use coins, banknotes and other forms or representations of money to explore both art and money are forms of capitalist mediation. Chapter two contrasts the money-oriented work of three artists in the later 60s and three after the 2008 financial crash to see what financialization has changed. Chapter three follows the strategies of artists using participatory methods to explore and critique money today. And the final chapter grapples with the question of how the financialization of art markets reveals a much more profound shift in the underlying nature of capitalism and society.

Max Haiven is Canada Research Chair in Culture, Media and Social Justice at Lakehead University in Northwest Ontario and co-director of the ReImagining Value Action Lab (RiVAL). He writes articles for both academic and general audiences and is the author of the books Crises of Imagination, Crises of Power: Capitalism, Creativity and the Commons, The Radical Imagination: Social Movement Research in the Age of Austerity (with Alex Khasnabish) and Cultures of Financialization: Fictitious Capital in Popular Culture and Everyday Life. He is currently working on a book titled Art after Money, Money after Art: Creative Strategies Against Financialization.