Presentation: Art in the Age of Crowd “Sourced” and “Funded” Production 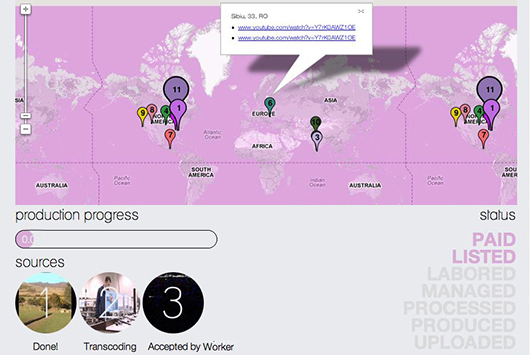 Crowd-sourcing – a portmanteau of crowd and outsourcing – has become an increasingly popular online format for getting just about anything done in a short amount of time. What is the role of crowd-sourcing and its newer sidekick, crowd-funding, in contemporary forms of production? How are these participatory platforms impacting the cultural sphere and broader global environments?

Stephanie Rothenberg, an artist based in Buffalo, NY, will present a series of projects created individually and in collaboration that explore the cultural and economic dimensions of various modes of crowd-sourcing and crowd-funding participation. She’ll begin by selling you a pair of designer jeans manufactured in a virtual sweatshop. This will most likely be followed by a public inquiry about your sexual fantasies using an adult entertainment website that will outsource these personal secrets to an anonymous global workforce.  And to keep that warm fuzzy feeling, you can make a charitable online donation to her “telematic” garden and watch your financial data be exchanged from the developed to the developing world. Whether online or offline, these mixed-reality situations call into question the outsourcing of labour, desire and empathy in a socially mediated world.

Programme: 1 hour presentation followed by 30min Q&A and discussion
This presentation will be introduced and moderated by Tatiana Bazzichelli, independent curator and researcher on hacktivism and network culture.

Presenter biography: Stephanie Rothenberg is an interdisciplinary artist working with participatory performance, installation and networked media to create provocative public interactions. Moving between real and virtual spaces, her work investigates new models of global, outsourced labour and the power dynamics within technological utopias. She has exhibited and performed internationally in venues such as FACT, LABoral, the Sundance Film Festival, transmediale and the Whitney Museum Artport and is a recipient of numerous awards, most recently from the Harpo Foundation and Creative Capital. She is Associate Professor in the Department of Visual Studies at The State University of New York (SUNY) at Buffalo.

Moderator biography: Tatiana Bazzichelli is an independent curator and researcher on hacktivism and network culture. She is founder of the Disruption Network Lab, a laboratory of research and practice on art, hacktivism and disrupting business, based in Berlin. She was Postdoc Researcher at the Centre for Digital Cultures /Leuphana University of Lüneburg in 2012-2014. From 2011 to February 2014 she was programme curator at transmediale festival in Berlin, initiating the reSource transmedial culture, an ongoing distributed project of networking and research
(www.transmediale.de/resource).
In 2009 she was Visiting Scholar at Stanford University, researching hacker culture in San Francisco and the Silicon Valley. In 2011, she received a PhD degree in Information and Media Studies at the Faculty of Arts of Aarhus University in Denmark, researching disruptive art practices in the business of social media. She wrote the books: Networked Disruption: Rethinking Oppositions in Art, Hacktivism and the Business of Social Networking (DARC Press, 2013); Disrupting Business: Art and Activism in Times of Financial Crisis (co-edited with Geoff Cox, Autonomedia, 2013); Networking: The Net as Artwork (Costa & Nolan, 2006 /DARC Press, 2008). She is born in Rome (Italy) and since 2003 she lives and works in Berlin.
http://www.disruptionlab.org
http://networkingart.eu
http://disruptiv.biz