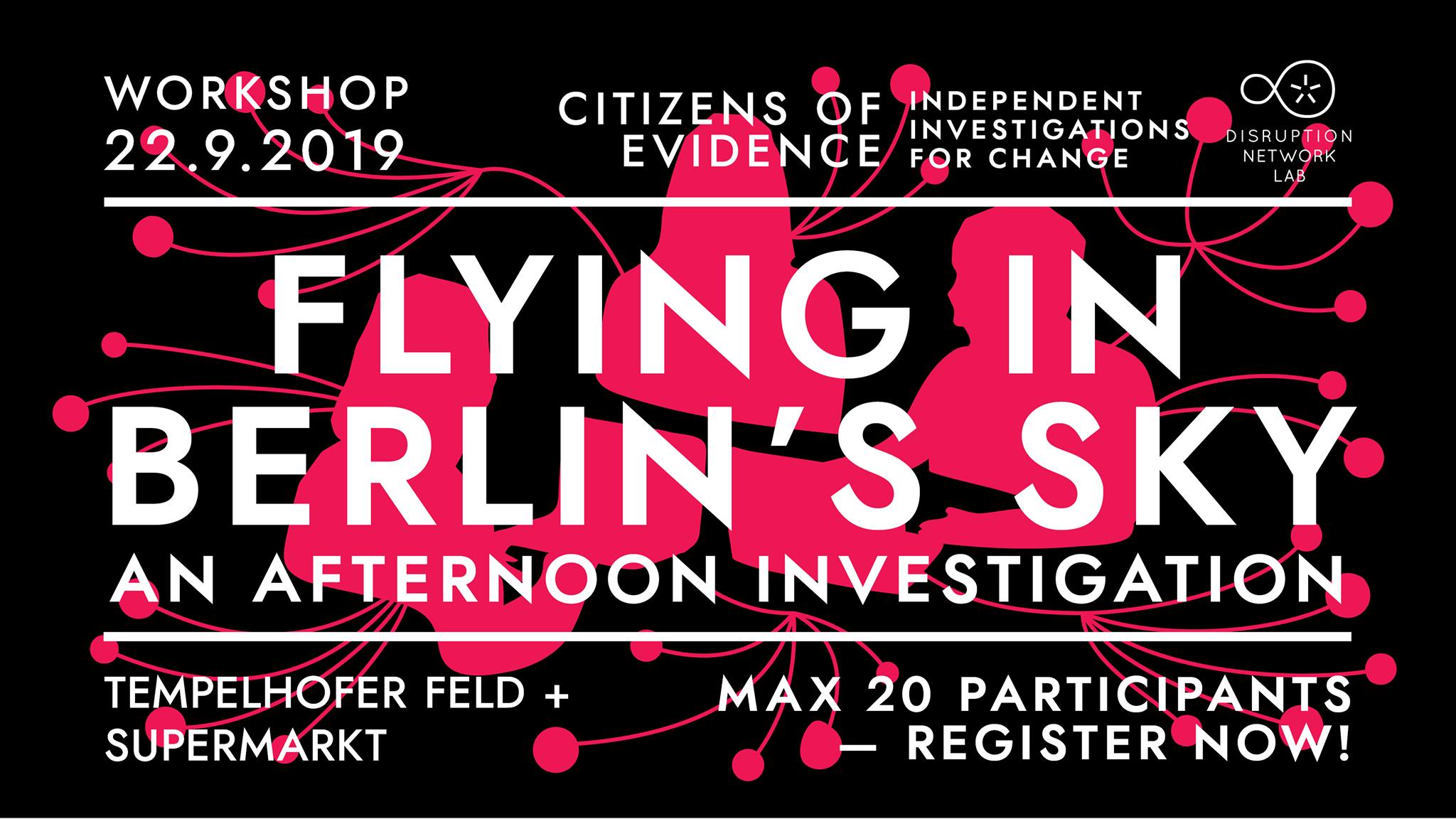 Where: We will start the workshop at Tempelhofer Feld (meeting spot: https://goo.gl/maps/Tum3pz6jWjokdYQH9, close to U6 Paradestr) and finish the day at SUPERMARKT Berlin, Mehringpl. 9, 10969 Berlin.
Cost: 30 Euros
Language: English
Registration: The number of participants is limited to 20. Booking is essential. Please get your ticket here: https://pretix.eu/disruptionlab/citevidence/
Material: Please bring your laptop.

Flying in Berlin’s sky, an Afternoon Investigation is a guided research into the people flying over Berlin. Every day, aircrafts criss-cross the airspace above the city: private jets, military planes, and the regular tourist flights. Where do they go? Who owns them? What are they doing? If you head to most websites tracking planes, you’ll only see the scheduled Lufthansa or Eurowings flights. Boring.

In this real-time investigation, we’ll first head outdoors to Tempelhofer Feld and setup our own antennas to detect all the things flying above us. Then, we’ll bring the data back to the “lab” at Supermarkt to analyse it, find some interesting planes and investigate them. You don’t know what we’ll find, and neither do we!

At the end of this workshop, you’ll be able to setup your own ADSB antenna to detect planes (which you can buy for under €50) and analyse the data you collect.

Emmanuel Freudenthal (Freelance Investigative Journalist, Dictator Alert, FR/KY).
Emmanuel Freudenthal is a freelance reporter based in Nairobi who has been conducting investigations all over Africa for a decade. He focuses on stories that break entirely new ground, from nerdy data analysis to war reporting, Two of his corruption investigations that used public documents, such as financial reports and court judgements, have led to ongoing police inquiries in Australia and Canada. He’s also crunched data to calculate the time that Cameroon’s President Paul Biya has spent on private trips abroad (4.5 years). As part of a BBC team, he won a Peabody award for an open-source investigation finding the soldiers who murdered two women and two children while filming themselves on a smartphone. His stories have been published by the BBC, Le Monde, The New Humanitarian, Paris Match, Sydney Morning Herald, The Daily Telegraph, African Arguments, Journal de Montréal, TV5 and others. Emmanuel studied economics at UTS in Sydney, then anthropology and politics at the University of Oxford.

Sector035 (InfoSec, Geolocation & OSINT, NL)
Sector035 is a security officer at a big company, and besides that he loves to share his passion for open source intelligence. He does this mostly online via his weekly newsletter (medium.com/week-in-osint), as member of the OSINT collective ‘OSINTcurious’ (osintcurio.us) and he is part of the Quiztime crew, that offers fun training for researchers and journalists.