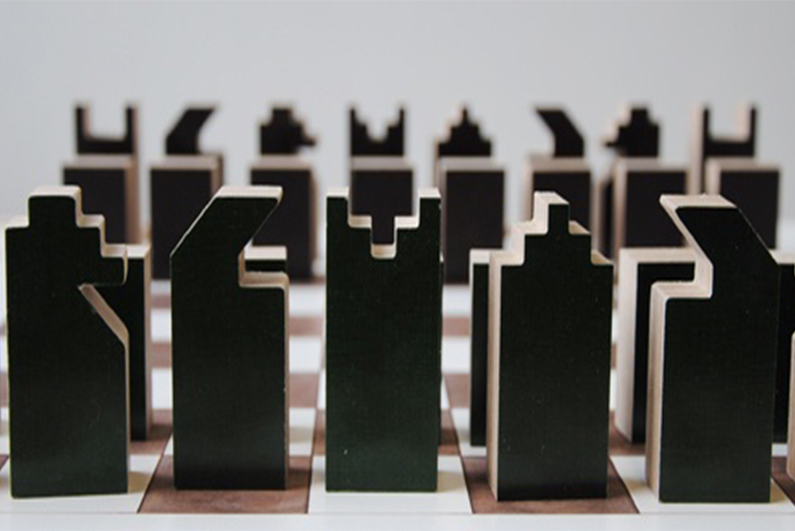 From April 13-30, Berlin-based artist Marion Andrieu will take over SUPERMARKT for an artistic investigation based on a series of chess interfaces, as well as their social and strategic implications. Our co-workers, event participants and café guests are invited to explore the game as a starting point for artistic, social and political expression.

This live research project offers a phenomenological approach to the objects of a chessboard and the behaviours surrounding the game. The design of the chess set is the starting point of the work’s wider focus – looking at the game’s interface in various forms influenced by the old two-dimensional computer chess games, embodied in both 2D and sculptural forms. These different forms and interfaces encourage different audience behaviours and focuses, both autonomous and in interaction.

“Chess is not for timid souls.” – Wilhelm Steinitz

The game of chess is believed to have originated in the 7th Century and no other game in history has been so widely reflected on in art and literature. Chess remains an intriguing and complex subject for contemporary artists, and its strategies have been adopted to a multitude of strategic games and online interactions.

During the second half of April, you are invited to explore and interact with the works at SUPERMARKT. Take a walk through the space and view the objects, try to find your own position and strategic take within the game elements, or sit with the artist Marion to play a match. She will be present between Wed – Fri from 10am to 6pm (plus on appointment Mon & Tue) and is happy to be challenged for a game or a personal talk. She will also continuously evaluate the various interactions taking place, making the evolving results visible in her research zone.

This two week research phase will start with a special night of chess on Saturday 13 April. The programme for the evening will be as follows:

19:00: Opening // Explore the works on display with guided introduction from the artist

21:00: Unorthodox Game Sets // Join us for a game using slightly unorthodox chess sets, or simply a drink and discussion at the SUPERMARKT bar