Please read the full invitation text of the event here.

How can artists, creative labourers and cultural producers survive within the increasingly austere and competitive institutions, structures and systems of financialized capitalism? How are they revolting against them and mobilizing sabotage, antagonism and creative destruction from below? And what visions and practices are being generated to prepare the way beyond this dire situation?  These questions kind of served as a starting point for our discussion. But: was it really a discussion in the end? Maybe this whole event turned out rather as a collective assessment of our current condition, which Max frames as “financialization”: the increasing domination of the economy and social life by the financial sector.

We imagine that art and money are old enemies, but both domains have been always closely intertwined, as Max pointed out in his introduction. He also claims that perpetuating this myth actually reproduces a violent system of global capitalism and prevents us from imagining and building alternatives: From the chaos unleashed by the ‚imaginary‘ money in financial markets to the new forms of exploitation enabled by the ‚creative economy‘ to the way art has become the plaything of the world’s plutocrats, our era of financialization demands we question our romantic assumptions about art and money.
(Pluto press book cover text).

Max presented a number of projects that explore the way contemporary artists engage with cash, debt and credit. He thereby identfied a range of creative strategies for mocking, sabotaging, exiting, decrypting and hacking capitalism today.

An example of artists using money to confront financialization: 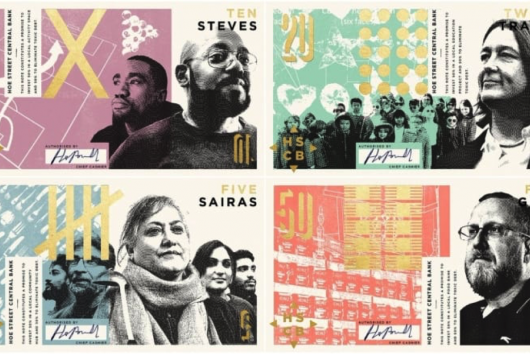 The bank is a key part of the feature documentary film ‘Bank Job’ bringing together a local community to examine how money and debt are made in our current economic system and look for alternatives that may work more in the public’s favour. Hoe Street Central Bank has been the centre of an act of citizen money creation. Local people of all ages and backgrounds have been working to print HSCB bank notes in denominations of 1, 5, 10, 20 and 50, 100 and 1000 on a public print production line. More info here: https://bankjob.pictures/bank/

An example of artists trying to carve out space within existing institutions and systems:
Nuria Güell and Levi Orta, Arte Politico Degenerado, 2014 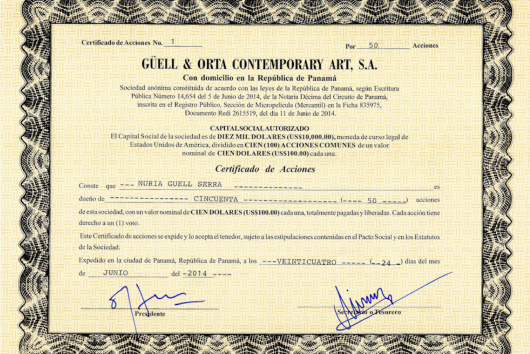 After setting up a public limited company in a tax haven, the artists Núria Güell and Levi Orta will hand over the administration of one their company’s bank accounts to a group of activists that are developing a company project on the fringes of capitalist dynamics. The management of these accounts will enable users to evade state-imposed regulations, by the ECB and IMF, and challenge the monopoly of the financial system, thus facilitating free operations to develop a self-governing economy.

An example of artists who dedicate their time and energy to experimenting or “prefiguring” future practices:
Fran Ilich, Spacebank 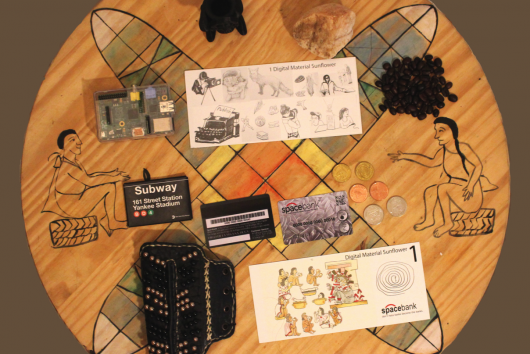 Don’t hate the banks – become the banks, is Spacebank’s motto. Spacebank is a virtual community investment bank that strives at creating livelihood for those people that are usually excluded from the economic system.

By presenting these examples Max provided a frame for different radical artstic responses to our current situation. “Radical” here means an approach that understands these problems as deeply rooted in the chaotic structures of capitalism and neoliberalism, which means also recognizing the way these systems have always been intertwined with racism, sexism, colonialism, ablism and other forms of oppression.

For the sake of conversation, Max framed these approaches as those struggling within, against and beyond the institutions, systems and structures of financialized, neoliberal capitalism, which would turn art towards their own reproduction.

After Max‘ introduction, we heard three responses by Lenara Verle, Tatiana Bazzichelli and Elena Veljanovska, each of them addressing one particular strategy.

Lenara Verle was first with commenting on „beyond“:

Lenara shared some of her thoughts regarding new currencies, new habits of conviviality, new methodologies of collaboration and care. Lenara Verle is an artist and researcher deeply rooted in the intersection of art, money and technology. She works in the field of alternative currencies, commons financing of art. Lenara has created the Currency Lab Board Game as well as the Coinspiration website and has deep insights into the roles and functionalities of money.

So, she came up with the question of how to value art at all. She presented a decision-making matrix which asked „Why buy art?“ and brought up the question of what it actually is that people acquire when they purchase a piece of art. Lenara also challenged the question of ownership of artworks, especially of digital works that can basically be copied infinitely. She pointed that our concept of ownership has changed during the history. Indigenous communities bring a view more aligned with a stewardship model, including access, use and even exchange but not the right to destroy or exclude. The Romans brought a different idea, of absolute unrestricted ownership, which we use to this day. Can we think of new and better concepts of ownership for the future?

Why buy art? A new form of ownership powered by the blockchain reaffirms many good reasons for doing it, plus one more: enriching the cultural commons. Please read more about this in Lenara’s latest article Redefining Ownership – Rare Digital Art Market.

These were basically the thoughts that Lenara offered as a response and contextualisation of what Max has proposed around the notion of „beyond“-strategies. Lenara suggested to continue this conversation in her breakout group after the break.

Elena is a freelance cultural manager and curator. She started her response with a personal account of her own biography: Being raised in Skopje / Macedonia, in a former socialist country which believed in a classless society, liberation of the capital logic and glorifying multicultural collaboration, Elena still tries to come to terms with the connectedness (and sometimes disconnection) of art and money.

Elena pointed out, that she comes from a tradition where art education was focused solely on the creative output and valorization. It never put art in the socio-political context where it was created, or the socio-political context for which it was created. „Therefore, through my work as a curator, and especially as a cultural manager and art fundraiser, and sometimes even an activist for bettering the cultural workers conditions, I was facing this backstage of how art has been produced and what is the struggle to produce art“.

In this context, Elena presented an event she has recently co-initiated at SUPERMARKT, called Unmeasurable Economics, a critical reading of funding applications and evaluation reports in the arts. She reminded us of the fact that funding applications and evaluation reports for cultural production are micro reflections of the values and politics underlying the systems producing them. They are the public system’s struggle to justify the role of art and art’s struggle to sustain a sort of autonomy.

„While the focus of this event was to think of ways to liberate art of the vassal relationships with donors and art evaluators, some of things that popped up were also the way we think about fair distribution of money as well as fair distribution of content, and how to better focus on producing quality art and through that improve the relationship with the art recipients. And above all, the potential for being critical through art.“

Tatiana Bazzichelli on „within“

Tatiana shared her personal starting point of what it actually means for her to change a system from „within“. Right at the beginning of her response she referred to Max‘ question „Shall we abolish art?“

Tatiana advocated to change the art system from within: by bringing „disruptive“ players into the field, that haven’t been recognized as part of the artistic domain so far. Following the theoretical debate around whether to bring “life into art” (as Fluxus and the post-Avant-gardes advocated in the ‘60s-’70s) or “art into life”, in Tatiana’s case, the latter would mean to include into the definition of artistic practices the activities of hackers, social justice activists, critical journalists and whistleblowers. „I have had many discussion with hackers in the late 90s about why I think their practice is art.“ In her understanding, many of these practices pointed to a future potential that could help unshackling „contemporary art“ boundaries and allowing artists to better understand the socio-economic reality and finding new forms to reflect on it. Therefore in her perspective, art should not be abolished, but we should all collectively work to redefine it. Rather than leaving art only in the hands of the art market, it is necessary to creatively appropriate its meaning.

Central to Tatiana’s practice is the notion of disruption as a driving force for systemic change. Tatiana is founder and director of the Disruption Network Lab, an ongoing platform of events and research on art, digital rights and disruption in Berlin. Over the past years, she has helped to re-contextualize the world around us by tackling topics such as right-wing extremism, hate news or investigative journalism – therefore bringing people and disciplines together that would normally not get considered within traditional arts institutions.

But the curation of these events is just one part, the other is of course to find funding for it. This especially calls for an ability to change systems from „within“. Tatiana talks about her experiences in creating funds for the Disruption Network Lab and how she and her team are constantly challenged to find the right wording for what they do (not only in the context of artistic practices, but also within the fields of social justice, investigative journalism and human rights). Also, creating funding partnerships is more than just transfering funds from one bank account to the other: it’s a constant exploration of each other’s values and an ongoing search of finding loose ends that all of a sudden create value together. So, in that sense, following Tatiana’s talk, each successful fundraising contract is an act of disruption in itself.

This was a very special event. Partially thanks to the excellent contributions by each speaker. But maybe also because there was a certain sense of urgency in the air. It became quite clear that that this discussion is not any longer about the antagonism between art and money, but the increasing financialisation of each & every domain of our lives.

It became also clear that we should have many more conversations like this. Such gatherings can hopefully offer us some structure for a series of conversations about developing and sustaining radical visions for culture, creativity and the imagination in the days to come.

Many thanks to everyone who contributed to this event! Special thanks to Max Haiven, Tatiana Bazzichelli, Elena Veljanovska, Lenara Verle, the team of Berliner Gazette and Jonas Frankki for sharing his photos!